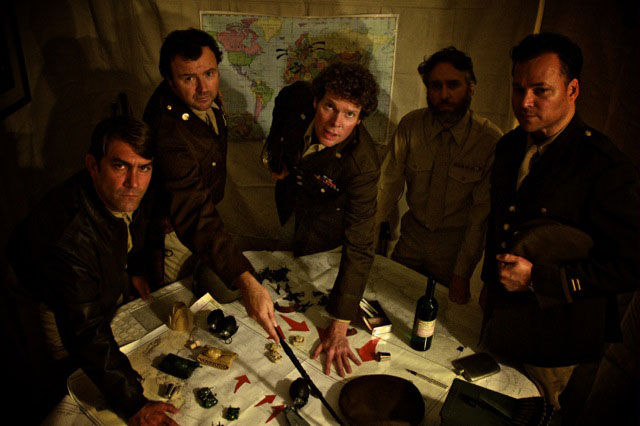 Wormburner are narrative indie rock luminaries from Brooklyn via Hoboken. KEXP in Seattle calls Wormburner “anthemic indie rock with a punk rock kick”. Time Out New York cites “echoes of Springsteen, The Clash and The Pogues that ring out in succinct vignettes…twanging and swelling over vocalist Hank Henry’s forthright, reedy delivery”. According to The New Yorker, Hank “can sound like a cross between Michael Stipe and the Mountain Goats’ John Darnielle”. The Deli calls Wormburner “lyrically charged rock with intriguing western movie tinges that will please fans of The Boss and The National.” In New York City, Wormburner regularly headlines beloved rock clubs like The Bowery Ballroom and The Mercury Lounge. Tour dates have landed Wormburner as far from home as the West Coast, where KEXP in Seattle has twice honored Wormburner with Song of the Day accolades and has even hosted the band for a live-in-the-studio performance. Wormburner has shared stages with Violent Femmes, Old 97s, The Walkmen, Deer Tick, The War on Drugs, Dean & Britta, School of Seven Bells, the late, great Tommy Keene, Bill Janovitz of Buffalo Tom, Cracker, and Camper van Beethoven (David Lowery produced Wormburner’s debut album). Legendary VJ Matt Pinfield hosted Wormburner vocalist Hank Henry for an in-depth interview on MTV’s 120 Minutes.

Wormburner’s third LP is titled “Pleasant Living in Planned Communities”. Included on Robert Christgau’s “Dean’s List” ranking the best releases of 2014, this album’s cast of desperate characters includes a downed airman in WWII Europe, a 21st Century soldier returning home from battle, and a transient gay hustler whose youthful looks are weathering with age.  Recorded in too many places to name here, “Pleasant Living in Planned Communities” bristles with a heightened urgency not captured on previous Wormburner recordings.  Yet somehow this whole album goes down smoother, the executions tighter, and the performances elevated courtesy of guest appearances by ace guitarists Sean Eden (Luna) and Paul Carbonara (Blondie).

“Hank Henry doesn’t swallow a word as he shouts his tuneful tales into the void…it’s the concept of a guy who sounds like he was an English major back when you selected that course of study so you could read novels. A minus” – Robert Christgau

“Drawing from the sounds of the ’80s American rock underground, Wormburner takes those tones and uses them to paint vivid character sketches electrically delivered by frontman Hank Henry.
[Wormburner] has roamed the streets of NYC for the better part of a decade, collecting details and sketches of local color for their songs” – KEXP in Seattle

“So clever and catchy and with such heart. It’s my favorite kind of thing” – Dave Holmes, Author of Party of One, A Memoir in 21 Songs

“The band’s onstage delivery reflects the professionalism of eight years together as a going concern, and the new album material comes across as some of the band’s strongest yet. This is a very easy band to like… I caught a pretty strong whiff of some of the better post-grunge bands, especially the mostly-forgotten Harvey Danger.” – NYC Taper (2014)

“A band with their own take on eighties college rock, and a lead vocalist who can sound like a cross between Michael Stipe and The Mountain Goats’ John Darnielle.” – The New Yorker

“A rich array of narratives and tales from life’s frontlines, ‘Pleasant Living in Planned Communities’ yields new discoveries with every listen” – Impose Magazine

“Wormburner play lyrically charged rock with intriguing western movie tinges that will please fans of the Boss and The National.” – The Deli

“A barrelling hurricane of rock that’s a cross between the chaotic beer-soaked party sound of The Hold Steady and an ambiguously Irish punk band. Though it’s hard not to get caught up in the band’s hurtling sound, the new music sounds more nuanced in its arrangement, with echoes of Interpol or Spoon adding a dark undertone to the band’s raucous mix.” – Royal Flush Magazine

“Anthemic indie rock with a punk rock kick. Frontman Hank Henry…speaks his lyrics in a Minutemen/Hold Steady kind of way. A narrative album told through the eyes of fugitives on the run, Placed By the Gideons is a testament to life on the road and the people responsible for placing bibles in hotel nightstands. Wormburner is a badass name.” – KEXP in Seattle

“Hardworking Hoboken quintet Wormburner puts an anthemic spin on the tried-and-true indie guitar-rock formula: Echoes of Springsteen, the Clash and the Pogues ring out in the succinct vignettes of last year’s striking sophomore set, Placed by the Gideons, twanging and swelling around vocalist Hank Henry’s forthright, reedy delivery.” – Time Out New York

“Their 45-minute set began with a bang and never let up. This is a band to be reckoned with — strong instrumentation, excellent songwriting, and the indefatigable stage presence of lead singer Steve “Hank” Henry. Henry’s lyrics are frank and often poignant slices of life that capture the ordinary lives of their protagonists. Placed By the Gideons is a superb new album.” – NYC Taper (2012)

“Wormburner blasts through one fiery, smartly lyrically-driven anthem after another.” – Lucid Culture

“Wormburner have the essence of a band made for the road. These songs are made for drives down long stretches of highway. Reminiscent of well-known punks taking on solo acoustic projects, from 7 Seconds’ Kevin Seconds to Strung Out’s Jason Cruz, here’s to betting that all twelve songs on Placed by the Gideons sound just as good as an acoustic one-man set.” – Absolute Punk

“…astounding….Henry sounds like other vocalists that are neither from his genre or time…..the stories combined with the scenery make Wormburner new and, to this point, unmatched. Four stars.” – Anti Music

“A Wormburner show has much in common with amphetamine-fueled soul revivals, if such a thing ever existed. In a world of chin-stroking art rock Radioheads and junk-addled Babyshambles stumblebums, it’s refreshing to find a band like Wormburner who so clearly believes in the power of classic songcraft to lift a room full of people clear off its foundation.” – New York Press

“They’re loud, they’re catchy, and they aren’t trying to be anything other than what they are….sounds like Isolation Drills-era Guided By Voices.” – Glorious Noise

“Wormburner is one of New York’s best rock bands. Period. Not a slip up in the repertoire.” – Sonic Parthenon

“The Christmas song Bells of St. Ignatius is Wormburner’s answer to The Pogues’ Fairytale of New York.” – Time Out New York

“The injection of Moog synth adds just the right touch of energy and retro goodness to the yearning vocals and big buzz saw melodies to set it apart from your standard guitar-driven, pop-enfused rock. This is a must for fans of Elf Power, The Mountain Goats and Ted Leo.” – UsedWigs.com

“Wormburner have supplied exactly the kind of indie-quirk power-pop that has a special reservation in the VIP area of my musical heart. I can’t help but love the kitsch synth sound in Autographed Copies. And the wonderfully warm guitars and crisp drums perfectly capture the emotion of the song, which is further advanced by the clear American accent of the vocal.” – The Mag (UK)